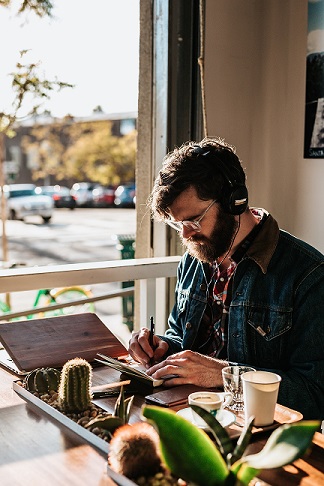 One confusing aspect of the English grammar is the use of the gerund.

Simply put, a gerund is one of the uses of the ING form of verbs. Such as the words: writing, cooking, sleeping.

We also know that we find this form of the verb in sentences like:

She is cooking dinner

They are washing the car.

But, what happens with the following sentences?

Cooking pizza is easier than you think

Those sentences do not express progressive actions, but they have verbs in the ING form. So, how to explain all these different uses?

The best way to know it is to roll back a little bit and start by studying the four forms of the verbs.

The Forms of the Verbs in English

Let’s take the verb To eat. The four forms of the verb Eat are:

What about the verb Walk?

The Present Participle, the Continuous Tense, and the Gerund

The most important point to know here is that the Present Participle, the fourth verb form, has different uses. One, as described before, is the expression of the continuous tense.

Example: They are painting the wall

Now, what we call a gerund is different from a continuous tense. With the gerund, we borrow the verb and use it to express something different than an action taking place. Let’s see what other uses the ING form has that are known as gerunds.

Gerund -Name of an Action.

If we need to use a verb as the name of the action the verb expresses, we use a gerund. For instance:

Swimming is good for your health, and it is fun, too.

In these cases, the verbs cooking, writing, and swimming are not expressing an action that is occurring.

Ask youself: in the prior examples, what are the main actions in the sentences or action verbs? They are not cooking, writing, and swimming.

Cooking, writing, and swimming are just naming the actions they express. As a matter of fact, these verbs are the subjects of the sentences they appear in, which means that they are acting as names, not verbs. In this case, we say that they are gerunds.

A note: the infinitive form, also known as the “To” form of the verb, can be used as a subject, too. However, it is said that sentences using this form are more philosophical or abstract:

To study math is convenient in High School

To go to church is something everybody should do

If we need to use a verb as an adjective that modifies a name, we use the ING form. When that happens, we also say that we are using a gerund.

I thought I heard the noise of running water in the bathroom.

I have heard the most exciting news.

In English, if a verb follows a preposition, such verbs must be in the ING form. In that case, we also say that it is a Gerund.

I am thinking of visiting my relatives

They read a book about becoming an entrepreneur

I suggested telling her about traveling by plane instead of by car.

Again, visiting, becoming, and traveling, are not expressing actions. They name the actions the speaker is referring to. In such case, we say that we are using a gerund.

The Gerund Must Be Use After the Following Verbs:

They detest mowing the lawn all weeks

Now, there is a second group of verbs that accepts another verb in the ING form after them or accepts an infinitive. These verbs are:

Different Meaning Depending of The Form of The Verb Used

It is interesting to notice that sentences with verbs from this list may have different meanings depending on the form the second verb takes. That is , if after the main verb comes another verb in the ING form or in the infinitive form.

Let’s study the case of the verb stop, for instance.

In this case, the subjects of the sentence where probably driving a car and stopped it to get into a place, for example, and look for water to drink.

In this example, the subjects of the sentence where drinking water and quit drinking it at some point.

Special Case With the Verb Try.

When we use the verb Try followed by a gerund, the meaning of the sentence is to make an experiment with.

She tried swimming before going to bed, and she slept better.

If we use Try followed by a verb in the infinitive form, the meaning changes. It has a connotation of making an attempt. For example;

He tried to swim before going to sleep, but she was very tired so she preferred not to do it.